Evasion is the first principle of Baguazhang combat. This begins as a simple premise to get out of the way of an oncoming force and evolves to more complex levels in which the attacker’s energy is drawn into and led by your own. When evasion is mastered it is very difficult for anyone to apply any type of force to your body. 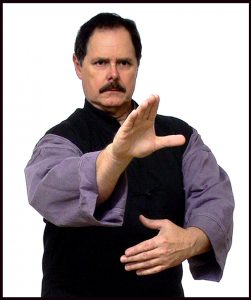 Dark clouds and thick canopy of pine trees conspired to make the forest even darker than normal in the fall of 1958. Robert and I knew we were about to be initiated into some new training method as we followed our teacher deep into the woods. Finally Li, Long-dao our Baguazhang master found just the spot he wanted, a tiny grove consisting of nine pine trees. Each tree stood straight and tall in the center of a small circular clearing. Each of the trees was about the circumference of a telephone pole spaced roughly from three feet apart.

Without a word Master Li launched into a run, spinning and turning around the tree trunks, at times he ran by barely skimming the bark at other he seemed to be dodging, ducking, striking, elbowing and bumping various trunks. It looked like he was fighting the forest. After a few minutes he stopped walked over to us and said, “The essence of Baguazhang is change. During combat with many you are always moving, changing from one location to another without pause. The Bagua man moves like a rushing river continually changing, striking, throwing, breaking never allowing his opponents to catch him in a pose. This is why we learn Jiugong-Dian. Now I teach you to combat many people all at once and survive.” Thus began our initiation into one of the most unique and powerful training methods that Nine Dragon Baguazhang system has to offer.

Running In Circles
Baguazhang was devised to deal with multiple opponents in close quarters by maneuvering rapidly through and around attackers striking, locking and throwing on the move. A hallmark of martial baguazhang is maneuverability. Rooted positions make it difficult to move rapidly during a gang attack the Baguazhang expert forgoes wide stances found in other arts as they limit him when confronted by three or more enemies simultaneously.

Today most Baguazhang martial capabilities are almost non-existent due to the modern “sportification” training routine. Traditional training for realistic combat skills against multiple opponents is almost a lost art. To understand the true usage of Baguazhang one has to move in straight lines, circle, and spin and turn in multiple directions as if dealing with numerous enemies. Shifu Li, Long-dao said, “One circle phhss, child’s play!”

This is done in a straight line then walking single and multiple circular patterns. A tree or post serves as a multifaceted teaching aid. Single post training aids the student in understand distance from the enemy and provides a surface for testing attack and defense methods. After some time students walk around nine posts learning to change direction and deftly weave in and around them with blinding speed. This is called Nine Skills Palace exercise (Jiugong-Dian九功殿). 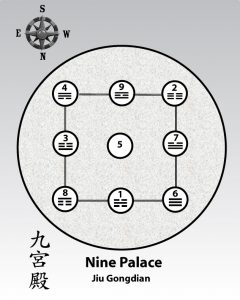 The Jiugong- Dian Training
Nine Skills Palace methods consist of nine posts set into the ground to simulate battle with multiple opponents. The name Nine Skills Palace was derived from an esoteric diagram the Luo River Book (Luo Shu洛書) related to the Book of Changes (Yijing易經).

Each of the symbols face directions corresponds to one Yijing trigrams. The center space is reserved for the number 5 representing earth as the central point. This material contains hundreds of exercises. I will explain only a small part of the program here to give the reader a general idea. Daoists also used the Jiugong-Dian as spiritual exercises to develop life force (Qi氣), longevity and health.

Post Construction
The set up consists of large poles set into the earth in a square pattern. The first posts were most likely bamboo or trees in the forest. Today we can use a variety of materials to construct our Nine Skills Palace. The most common would to use round wooden fence poles. I also found PVC plastic pipe filled with sand or gravel makes an inexpensive post.

Our posts are ten feet long with a circumference of at least 18 to 20 inches, set in the ground to a depth of about three feet. Dig holes about one inch larger than the post, set post in the center filling in the extra space with loose gravel. Gravel allows drainage to prevent rot if you use wood and also provides a bit of movement when striking to absorb part of the energy. 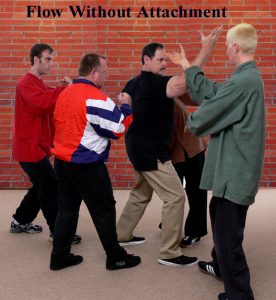 Old masters claim that striking a solid post with the palm without special liniments to prevent internal bruising can damage the qi system. Medically it has been shown that striking an immovable object such as a pole with the left palm can shock the heart. Some martial artists have suffered heart attacks due to repeatedly striking with locked out elbows on an immovable wall or post.

Your nine posts should contain enough space to maneuver through them however the distance can vary based on the individual requirements of each instructor. In my system the poles are spaced at approximately three to three and one half feet apart.

The poles are numbered as shown in the illustration. Each pole represents one Yijing Gua. The numbering starts with 9 to the South associated with Fire Gua. Number 1 is north related to Water Gua. Three is east is associated with Thunder Gua. Seven will be west representing Lake Gua. Number 5 is in the center. Our post area at the Gompa has a bed of loose gravel all around the posts. This makes for difficult footing so you can quickly tell if your footwork is solid or stance too wide as you will slip and fall with wide stances. 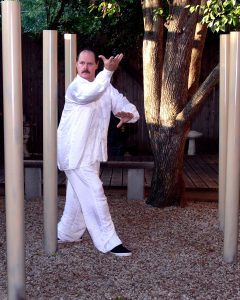 A Few Beneficial Drills
A standard beginners’ method called swimming dragon body should look like a water dragon winding around the posts. Start at number one, move through the numbers in sequence circling each post before moving to the next, then back through them in reverse order. It seems simple enough, however there are hundreds of ways to play these changes. Beginners should start by simply walking from post 1 through 9 at a moderate speed through the posts coming as close as possible but not touching them. The hands may be held in a posture or kept at the sides. This is for training the ability to turn and change direction without leaning or tripping. After completing one circuit through the poles go back from 9 back to 1, again follow the numbering to train the basic method and later walk freely in any direction you choose.

There are hundreds of drills and exercises one can perform with the Nine Skills Palace, the following are just a few ideas to give the reader a general idea. Remember to perform all tactics while moving do not stop or pause during the exercise keep moving.

Tactical Advice
When surrounded by multiple enemies the goal is to neutralize each opponent within one to two moves. Such skill must be simple, direct and quickly executed. There is no time for complex maneuvers in a crowd bent on your destruction. The mind must be disciplined to sense the actions of the enemy, strike and move to the next without pause. We must move inside his defenses strike or take down and move to the next opponent. Post training teaches us to strike from unexpected angles with any part of the body. When we see our posts as multiple enemies then training Jiugongdian teaches us to never stop moving or changing positions and tactics.