This is a basic principle used in all of the Li family arts; however, it is especially relevant in the Xingyiquan splitting / Pi-Quan method to take the opponent’s center even before you strike with the splitting palm. Not at the Wrist
An instinctive reaction when someone is striking at us is to slap or strike at the closest part of the incoming weapon. Blocking or striking the wrist may momentarily thwart the fist from striking us. However, a trained fighter will instantly fold his elbow continuing his attack or change to other tactics because the strike to his arm used as a deflection sets off what I call plan B.

Attempting to grab or catch the fist or wrist is difficult at any real speed. This is because it is coming directly at us and it is harder to judge distances when an object is coming straight on. It is also difficult because the end of the arm is moving very fast. To add insult to injury, unlike YouTube videos that show opponents striking and leaving the arm hanging there in space while the “master” performs multiple techniques, no real fighter throws a punch and leaves it hanging in the air. Real fighters snap out the punch and immediately retract it, making it almost impossible to catch or even deflect at the wrist area. When you deflect at or close to the elbow you can control, stick, follow or catch the arm.

To “bridge or close the gap” (Jieshu Jiuli 結束距離) we need to do it subtly and as close to the elbow of the attacking limb as possible. 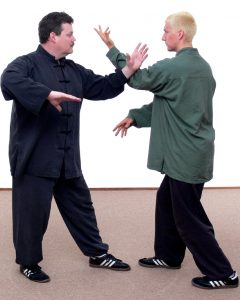 Control the Elbow
Using the rising action of Pi-quan to neutralize the attackers’ fist at the elbow provides much better control of his torso (spine). Controlling the spine allows us to unbalance his center from the first contact.

If moving the opponents’ body is our goal the best point of advantage is to control his elbow. The elbow provides a short lever arm. It requires less force to move the enemies’ torso than holding at the wrist. It is also moving approximately half the speed of the fist making it a more vulnerable target.

When using the neutralizing arm we slide the back of the palm forward against the outside or inside of his arm. This action is like a thin wedge that subtly slides his attacking arm off target. In some cases, it is acceptable to begin the movement at the wrist so long as you are rapidly sliding down the arm towards the elbow in one smooth motion. Work with a partner and research controlling his body at the elbow. Remember to project your intention  (Yi 意) through his arm into his body imagining you are pressing into his spine. This will disrupt his balance. To do this correctly you must practice slowly and then faster until you can perform the method at full speed with such a smooth action that the opponent never realizes what you are doing until it is too late!