Within the Chinese martial arts, there is a saying that to develop gong 功 (skill) one must put in time夫 (fu) and learn the meaning of Ruku 茹苦  (eating bitter). The term Ruku is often translated as suffering. In other words to gain a high level of skill, one must not only spend a lot of time training but the student must also suffer for his or her art. This suffering is not always about physical pain although that can be a part of the Ruku. It can also mean that one may have to give up other pursuits or leisure time activities to follow the path to attaining real skill.

Modern practitioners that understand this concept of Ruku and Gong Fu are becoming the exception rather than the rule in modern times. Many old traditions have been abandoned in favor of the scaled down, bare bones approach. So many think they can watch a few YouTube videos, read a book or take a workshop with an acknowledged teacher and somehow they will gain a high level of ability. Of course, this is not true but it seems to be the trend.

During the golden age of Chinese martial arts, students did more than practice for an hour or so a day or a few times a week. These schools had deep traditions and demanded loyalty and dedication those students with lazy tendencies were dismissed. While such actions may seem harsh, in reality, the teacher 師父 (Shifu head of the clan) was not interested in “casting pearls before swine” he was interested in training students who would carry on his lineage into the future after he was gone.

To keep the students reminded of their obligations some Wuguan 武館 (martial training halls) held special ceremonies to inspire the members to attain greater heights and goals of practice. Such ceremonies were often unique to a particular Shifu or Wuguan and were often kept private allowing only serious students to attend. One such ceremony I have had the honor to attend is held in the Li family Daoqiquan Gong Fu School in Arlington Texas. This is the Ku cha Yishi 苦茶儀式  (Bitter Tea Ceremony) held the first weekend of October each year. This Wuguan holds the distinction of being the oldest traditional Chinese internal martial arts school open to all peoples in Texas.  The event is also known as Founders Day and is followed by a banquet and workshops on internal arts throughout the following weekend.

For this ceremony, each student brings a flower and Hong Bao紅包 (red card monetary offering) for the Wuguan. These are placed on the Gongzhou供桌 (ancestors place) Students and teachers are dressed in traditional formal Gong Fu Han-Zhifu漢制服 (uniforms of the Han people). The Shifu in attendance are wearing the ceremonial Changpao長袍 (long robe or gown) worn by men during the heyday of Chinese martial arts. The head Shifu carries a Mu-Jian 牡劍  (Yang or male military war sword) symbolizing the focus of martial skills is derived from actual combat principles. This sword is often one passed down from the teacher’s teacher in an unbroken line of succession symbolizing the carrying of the lineage through time. 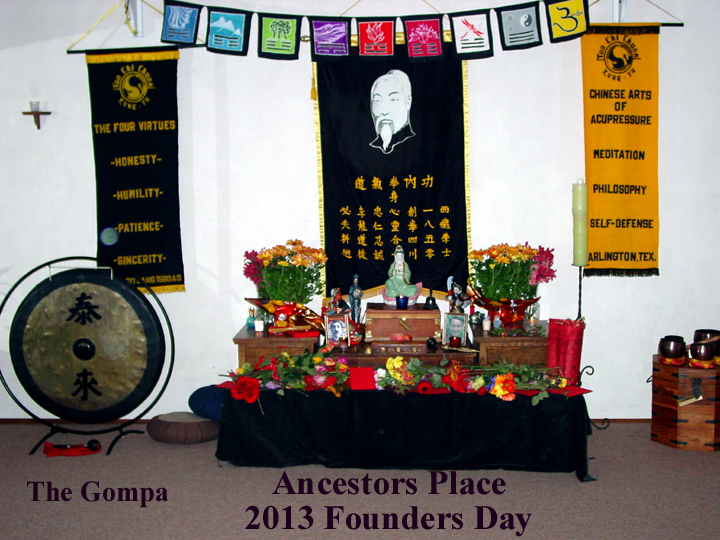 Students are ushered into the hall by attendants and asked to sit facing the Gongzhou. Each is given a teacup filled with a strong bitter tasting tea. All stand as one of the attendants rings the gong nine times. The Shifu of the art from all branch schools and head Shifu enter to sit facing the students. A small table is placed in front of the Jiazhang Shifu 家長 師父 (head of the clan) chair. It contains a large teapot and a few cups. Everyone salutes the teachers and ancestors place with a traditional fist in palm bow common to almost all Gong Fu customs and the students and teachers sit.

Now the Jiazhang Shifu introduces the visiting teachers from other Wuguan. He then begins to recite the lineage and history of their art naming all the masters back to the original founder of the style. Following this, he unsheathes the ceremonial war sword and explains the meaning of the double-edged blade and the characters carved upon it.

Upon the conclusion, certain students are singled out for recognition based on their progress in the arts over the last year. Next, the Jiazhang Shifu tells the story of the founder and how he was given cut flowers by some young students. The story says that he admonished them for killing the plants and asks them to respect life by showing him the plants growing in the field. The point being that all life should be preserved and not interrupted before the natural span of time allotted to a living thing. The Jiazhang Shifu then explains that the flower offerings brought that night by the students will be left on the ancestor’s place for 30 days so they can watch them fade and be reminded of the impermanence of life.

Next, the Jiazhang Shifu begins to serve tea to the visiting Shifu and assistants, symbolizing his service to all. After all have their cups filled everyone stands and follows the lead of the Jiazhang Shifu who recites the pledge of the Wuguan and the Daoqiquan lineage. All face forward cup held in both hands. A small sip of tea is taken as they recite the following.

“ I drink the bitter tea of practice. I dedicate myself to attaining the highest skill possible through my hard work and Ruku. I dedicate myself to the study of Daoqiquan and pledge to do my utmost to support the art, its instructors and to follow the principles of Wude (martial virtue). I know that to make progress I must at times eat bitter but this will make me stronger. I seek to develop these four virtues passed down by the masters.” Each student and the instructors recite the four virtues and take a sip of tea as they bow to the four directions led by the Jiazhang Shifu.

Honesty:   To my self and others at all times (facing south ancestors place)

Humility:   To those above and beneath me in thought words and deeds (facing west)

Patience:   I put the needs of others above my own (facing north)

Sincerity:   I am afraid only of my lack of sincerity. (facing east)

Turning back to the Gongzhou the Jiazhang Shifu turns to face the students and all drain their cups turning them upside down and say. “My cup is empty I am ready to learn!” 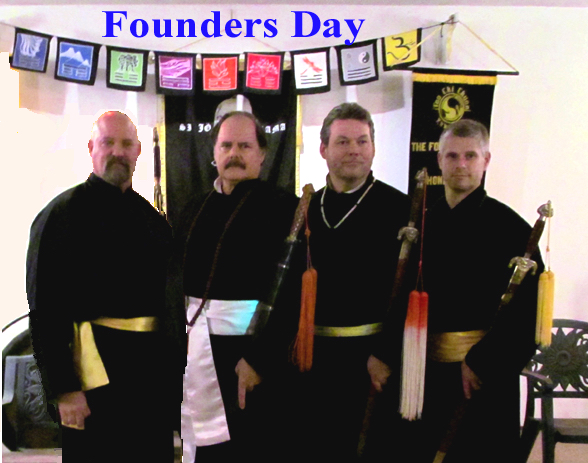 As I mentioned this is a unique presentation held and honored within the Li family clan from Sichuan province China passed down for more than 400 years and still kept alive today by Jiazhang Shifu John P. Painter at his Wuguan in Arlington Texas. Each time I experience this moving and elaborate program I come away with a renewed fervor to train even harder and as the late master Jou, Tsung-Hwa used to say “to each day make a little progress!” I think traditions such as this definitely should be preserved as part of our martial heritage. Do you eat bitter?