↓
Without long and constant practice,
It is difficult to reach ultimate enlightenment
– Wang, Chun-Yueh on Taijiquan 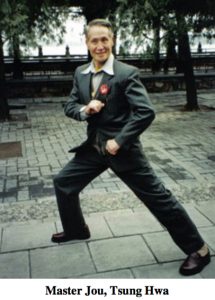 Before his untimely death in a car accident in 1998 Taijiquan Master Jou, Tsung Hwa wrote this letter to his students concerning the fate of modern Taijiquan and how one should study the art if truly serious about developing its deepest levels. Jou, Tsung Hwa told me that he was very concerned his beloved art was becoming “watered down” by tournament forms competitions and the turning of Push-Hands into a competitive sport.

One evening at his Tai Chi Farm in Warwick New York I was standing behind him in the dark as he secretly watched two well-respected teachers of Taijiquan playing push-hands in the Zhang building. As he watched he would shake his head, muttering to himself. Turning he saw me standing there and he said, “John if this is what is being taught as Taiji all, is lost! We must find a way to make the art respected for health but also restore its fighting ability, this is my goal!”

The following is excerpted from his letter to his students from the seventh edition of, The Dao of Taijiquan Way To Rejuvenation.

May 1998
I began practicing Taijiquan when I was 47 years old and very ill. However, it was not until 17 years after serious research and practice that I began to comprehend that Taijiquan is not like regular exercise. To practice Taijiquan, it is necessary to put your mind into the movement and seek to develop the spirit of vitality or Shen. The mind, body, and spirit must be combined as one unit. In this way, the practice of Taijiquan allows you to experience the depths of Chinese philosophy.

Since my book on Taiji was first published, it has been translated into various languages including Dutch, Italian, Spanish, Russian and Polish. I feel honored to have received many wonderful letters from Taijiquan players around the world who call this book “The Bible of Taijiquan.” Readers appear to appreciate the two important facts I considered when writing this book.

The philosophy of Taijiquan contained in my book is not my own creation. It is the incredible gift left to us by the ancients. I have only collected it. I seek to “keep it alive” and make it available to everyone. I can only take credit for making the old works easier to understand, and for developing some of the exercises for Changsi-Jin (coiling / silk reeling) energy development.

Now in 1998, I will be 81 years old. More than 30 years of daily and nightly practice has led me to believe that Taijiquan is becoming a lost art. I do not say this to scare you, but consider what the classics state and what is really happening nowadays. Within The Classics of Taijiquan by Wang, Zongyue it is stated, “In boxing, there are many teachings about combat. Although they differ with respect to postures, they can never go beyond reliance on the stronger defeating the weaker or the swifter conquering the slower. These, however, are the result of physical endowments in many cases and not necessarily of practical application and experience.” This explains that external schools of martial arts rely on strength and/or swiftness.

In Taijiquan, this should not be the case, as it is further stated, “The strong and quick, however, cannot explain nor implement the deflection of a thousand pounds’ momentum with a force of four ounces, nor can it explain an old man’s defeat of a great number of opponents.” These are the characteristics of true Taijiquan. Age, muscular strength and speed are not the determining factors of a person’s Taijiquan ability. Yet let us be honest. Look around you and see what is happening today. In pushhands or Taijiquan sparring competitions, competitors are divided into gender and weight categories. These are physical attributes that should have no effect on a Taijiquan fighter’s abilities. The classics emphasize this point.

Furthermore, excellent external school fighters can defeat Taijiquan players in sparring. Many famous Taijiquan instructors have a solid background in Gongfu or other martial arts and teach/use those elements in Taijiquan and pushhands practice. Who is really using purely internal traditional Taijiquan methods? Who really understands them? Who really practices pushhands or Taijiquan sparring without making it a match of pushing and shoving with lots of external force? This is all not the traditional Taijiquan way. The practice of Taijiquan has today become impure. “To deflect a thousand pounds’ momentum with a force of 4 ounces” does not allow a fighter to meet force with force. A bullfighter does not meet the bull head-on; he knows when to step aside and let the bull pass by.

Furthermore, if people were truly following the Taijiquan principles, they should not be getting so weak with age. If Taijiquan is so good for longevity, then why are so many older Taijiquan players often weaker, hunched over and sicker than people their age who do not play Taijiquan? They are not getting the full benefit of Taijiquan because they are not fully following its principles. People cannot demonstrate the abilities of the ancient masters and are no longer concerned with studying and embodying the principles of the classics. Instead, they want to focus on details, little tricks and other insignificant ideas. This is what I mean about Taijiquan becoming a lost art. How can we change this sad situation? How can we revive Taijiquan? To do so, we have a lot of important work to do!

2. All movement has three stages: hand, torso and mind methods. Taijiquan is a torso method. Hence, Taiji players must avoid all hand methods. Concentrate on using the central body (Dantian and torso) to initiate the movement and transfer it to the periphery (arms and hands). Strive for synchronicity and unity in all movements. Practicing the solo form and pushhands while moving the arms and legs separately from the body is akin to a star athlete pitching a baseball by only using his arm to throw the ball! After the torso method, reduce external movement and increase the activity of the mind in order to develop the mind method. In this way, the practice of Taijiquan approaches the Dao.

3. Taiji players must develop the Dantian (center point below the navel) and “breathe without breathing” to control the Chansi-jin (coiling force) throughout the body and to apply the theories of the eight trigrams (Bagua) and the five elements (Wu Xing).

4. Taiji players must look at historical facts and follow a path of development similar to that of Yang, Lu-Chan. As you read my book, you will learn that he visited the Chen family to learn their first and second routines and then returned home and spent years in serious practice. He then began to develop the Yang form. The Yang family continued to develop the form through three different generations and nine different ways of practicing it. Taiji players must follow his example. In other words, if you want to revive and practice traditional Taijiquan, you must start the same way as Yang, Lu-Chan.

• Study the philosophy and begin practice of the Chen first routine in order to develop the Changsi-Jin.

• Then learn the second routine to develop the fa-jing for using internal energy to explode into external force for fighting.

• After these requirements are met, just as the blacksmith purifies his metal, we must “forget” the Chansi-jin and Fa-jing to do the Yang form.

• Then the focus can finally be put on the development of the mind and spirit.

To spend our time learning Taijiquan without any serious consideration of its classic principles and stages of development is a waste of our time and does damage to this art.

Copies of
The Dao of Taijiquan Way To Rejuvenation. By Jou, Tsung Hwa
Can be ordered from Amazon books at this link