“When your Yi (intention mind) directs your internal energy from your Xin (heart mind) this coupled with your body circling movements the force for change arising from Jiulong Baguazhang becomes as steel tempered a thousand times in the fire. It is flexible yet very strong and has the power to defeat your inner demons as well as those from the outside?”

There are many styles and systems of Baguazhang each separate style has its own name and also numerous variations that change with the emphasis placed upon it by the teacher. What all most all Baguazhang styles have in common is the practices of walking in a circle, yet even these methods vary from system to system and teacher to teacher. Anyone who says they have “the real system” as opposed to others variations is simply deluded. The real origins and methods of Baguazhang are the subject of much debate in China. Dong, Hai-chuan is given the title of creator of the most popular systems; however he taught each of his students a different version of his ideas. 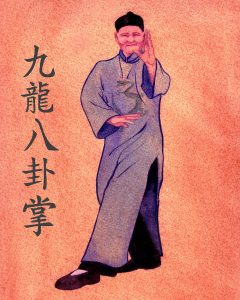 The Li family of Sichuan developed a Baguazhang called Nine Dragon Eight Diagram Palm (Jiulong Baguazhang). This style is believed to have evolved from teachings derived from military commander and longevity sage, Li, Ching Yuen a Daoist from Sichuan province. Although there is no conclusive historical evidence to confirm or deny these claims. Because my Zongshi 宗師 (master of great learning and integrity) Li, Long-dao claimed Li, Ching Yuen as the founder of this method we also honor Li, Ching Yuen as our Zushi 祖師 (founder of a school or system) and not Master Dong- Hai-Chuan whom we do honor as a great patriarch of Baguazhang from another lineage.

The original purpose of the Jiulong art was adopted by the Li family as primarily a method of combating multiple attackers; however over time the Li masters discovered there were many other hidden benefits to the method. The benefits had been there all along in Li, Ching Yuen’s art, but the early focus of the bodyguards in the Li family was martial pursuit. Today after learning the Jibengong (basics) known as Dragon Rolling The Pearl one can begin practicing the eight palms each of which are mini lessons is martial art, internal energy, psychological understanding and spiritual awareness. 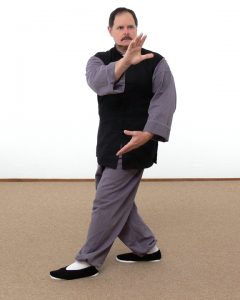 After the eight palms are realized students can practice Jiulong Baguazhang circle walking as a martial art or with further instruction from their Shifu it becomes a form of moving Chan (Zen) or meditative yoga. Within this yoga like practice the art has been shown to bring about amazing results in the improvement of health, longevity, vitality and even a level of spiritual (meditative) awareness.

Along side of this practice is the Jiankang-qigong 健康 氣 功 (Health energy skill) practices that encompass a wide range of exercises derived from Jiulong Baguazhang methods known as the Feixing Long Qigong 飛行龍氣 功 (Flying Dragon Energy Skills) There are too many levels to the art to mention in this short article. I hope however that this has given the reader a small glimpse in to the wonders that await those who choose to train Jiulong Baguazhang arts with us.