“The best of all exercises is the practice of standing meditation,
the universal post.” 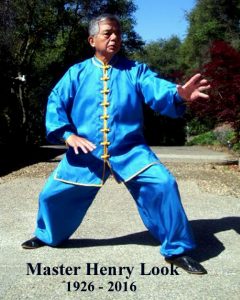 The following article was taken from an interview published in IAM Magazine in November of 1992. We would like to share this treasure trove of information with our readers as perhaps in some small way it will help to preserve the teachings and legacy of this wonderful Gong Fu master who has now passed into the shadows.

Among the many highlights concerning the arts of Xingyiquan and Yiquan to be gleaned from this interview is also a look into how “old school” Chinese masters taught their students and the levels of decorum and virtues (Wude) they expected from their students. Due to the length of the article we will publish it in three installments.

Dr. Painter:   Let’s start with two questions. Were you born in China? Did you study Gong Fu there?

Shifu Look. No, I was born in Sacramento California but when I was two years old, my parents took us back to China to live. In China when I got older I discovered that I had some uncles who it turns out were very skilled in Gong Fu. One of my uncles was a real tough guy, sort of the troublemaker of the family. My younger uncle one very shy and was always being picked on by the older uncle. So the younger uncle wanted to train in Gong Fu to defend himself against his brother.

Dr. Painter. So you did start training in Chinese martial arts (Gong Fu) in China.

Shifu Look. Well, yes and no! These uncles wanted to teach me Gong Fu but being quite young I was more interested in other things. Then at about eight years old, I learned how to do a horse stance, and I learned the staff fighting method. My brother and I practiced together with the staff. The truth is that I was not all that interested in it so I sort of drifted away after a time from this training.

We lived in China for about nine years and while there I saw a lot of martial art demonstrations but none of it really made me want to learn Chinese martial arts. When we returned to the United States, my mother decided to settle in San Francisco. In the American school I found that I loved sports. I played Track, Soccer and Basketball; I got into sports and for a time thought that perhaps I wanted to be a coach of basketball as well as track.

Dr. Painter: I have always been impressed with the power and fluidity of your Xingyiquan skills. That was why I wanted my student Alan Marshall to train with you after he completed his Xingyiquan studies with me. You have a unique perspective on the art that should be preserved. What was your first experience with Xingyiquan? 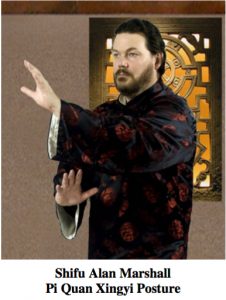 Shifu Look. My first experience with the power of Xingyiquan was after college with Master Kuo, Lien Ying in San Francisco. I had come to him to learn Guang Ping Yang style Taijiquan because of suffering from headaches due to the stress of being an architect. There was a lot of pressure in that world. So as far as Xingyiquan goes I did not know anything about it when I first started studying with him as I said I was learning Guang Ping Taijiquan at his school.

One day I was in a hurry to leave the studio and I said to my friend. “Ok, I’ll see you tomorrow.” I turned around to leave and as I was going out the door master Kuo was coming in. I ran right into him and wham I was thrown about ten feet backwards into the wall. That was my first experience with Xingyiquan’s internal power. It was amazing because at the time He was in his eighties and I was impressed. I thought wow this old man is really powerful. He is as strong and hard as a rock. I wanted to know what he had done and how he had made me fly back like that.

Dr. Painter: Did you ask him about it or if he would teach you this?

Shifu Look: Oh no in those days you did not dare ask a master any questions. You did not ask, you just listened and learned. Over a period of time he told me that this internal power came from Yiquan or mind boxing which is part of the way he taught Xingyiquan. One day he says to me. “The best of all exercises is the practice of standing meditation, the universal post.” I searched my mind and said. “How can this be the best way to train martial arts just standing still to become powerful? It did not make sense to me at the time. I did not understand but I thought. Well I’ll give it a try.

So I started practicing in a quiet place near the Bridge at the Holiday inn in San Francisco. In the early mornings I would go out and stand, Master Kuo might show up and sit reading a Chinese newspaper all the while secretly watching me to see how I was doing. Masters often like to observe their students in unguarded moments to get more insight into their true nature. The only other instruction Kuo gave me in this was to stand until there was a pool of sweat around my feet. This training was one of the hardest things I have ever done it was brutal.

Then towards the last few years I was with him he comes over to me and starts to do push hands with me every morning for a few minutes. He was teaching me not with words it was with his touch. He was applying principles he wanted me to learn in a subtle way. It was not until later that I began to realize all I had really learned from him. Master Kuo did not give me much in the way of verbal explanations for these things. He taught me by example not words.

Dr. Painter: Most western students would be put off by this type of instruction with no words. Was example without some verbal information enough for you at the time?

Shifu Look: Later when I met up and began to study with Master Han, Sing Yuen I got the verbal part. He said to me. “Whatever you do just ask me about it and I will try to explain.” So I asked him about the standing I had received from Master Kuo and he was happy to tell me about it. This really helped me out to know about the things Kuo had not told me.

Dr. Painter: So you had been doing this Yiquan standing post for some time and it is part of Xingyiquan. Had you started working on any of the Xingyiquan five element fists or forms at this time? 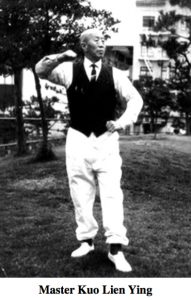 Shifu Look:  No, No Master Kuo told me that in the Guang Ping Taijiquan there is baguazhang and Xingyiquan energies and moves from them contained in it. That makes the Guang Ping style unique, I think. Of course not knowing Xingyiquan or Baguazhang at that time I did not know where the heck these movements were in the form.

Dr. Painter: That is interesting I was unaware that Guang Ping Taijiquan has baguazhang and Xingyiquan moves in it. Is it in any way related to Sun style taijiquan which Sun Lu Tang created? The Sun style also blends Bagua and Xingyi.

Shifu Look: To my knowledge there is no connection. Sun, Lu Tang developed his methods along about the same time as Wang, Xiangzhai the founder of Yiquan boxing. I am sure there are some similarities but the two methods of Taijiquan developed along different ideas.

Dr. Painter: What was your first exposure to the five element or five fist forms of Xingyiquan?

Shifu Look: One day I was watching the master Kuo, Lien Ying work out. He was very good in Baguazhang, Shaolin, Taijiquan and Xingyiquan. I was very lucky because he came over to me and just showed me the splitting fist (Piquan) form from Xingyiquan. You have to understand that Master Kuo did not teach many people his Xingyiquan or Baguazhang until they had passed through his Shaolin or Taijiquan training first. Right away I saw the relationship of the Piquan move to similar moves in the Guang Ping Taijiquan. This was my first exposure to understanding what Xingyiquan is.

Dr. Painter: And what is Xingyiquan all about in your own words?

Shifu Look: Well, Xingyiquan is a form of internal exercise in which you can learn to exert internal energy externally. The forms have animal natures. You need to develop almost an animal like spirit and instinct to do it right. What I mean by this is not in reference just to the twelve animal styles, but to all the techniques of Xingyi boxing. It is important that you learn to exert your imagination through your entire body to do Xingyiquan correctly. For example when the tiger leaps at its prey it totally commits itself mind and body to the action. There is no holding back.

Dr. Painter:  Dr. Painter’s teacher, Mr. Li said that Xingyiquan was like firing an arrow from a very strong bow. Once the arrow is launched it cannot be called back. It must go straight ahead and complete its flight. Is this what you mean by total commitment?

Shifu Look: That’s very true. That is the same thing as my teacher who gave me the example of a battering ram used in ancient times to smash down the door of a castle. You must become like that big ramrod. All of the energies of the ten or twelve men who are swinging that log must be coordinated towards using the ram rod to smash down the door. There can be no holding back. There must be a physical, mental and spiritual commitment.

Dr. Painter: The energy you describe seems to be very focused and penetrating. How is this different from Taijiquan?

Shifu Look: Yes, it is different from Taijiquan. When you use Taiji for self defense you utilize your opponents’ energy, guide it and direct it around like in Aikido. Xingyiquan is more like your description of the arrow. It goes straight for the heart. In fact Master Han taught a series of Yiquan standing meditations for developing this power. One of them was Tung Hsin (through the heart strike). You could stand in Piquan and use this image to create the penetrating energy.

Dr. Painter: We are not talking about muscular strength alone here are we?

WATCH FOR PART 2 IN OUR NEXT ISSUE