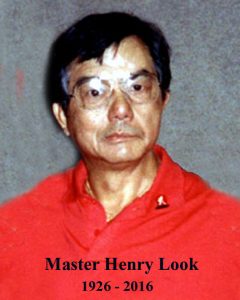 My beloved friend, mentor and Gong Fu brother Master Henry Look left this realm for a journey home Tuesday, November 29, 2016. Master Look who just turned 90 was truly a Grandmaster of Yiquan and Taijiquan.

He was a former US Marine, an accomplished architectural designer who created the floor plan and designs for the Benihanna’s restaurant chain; He was also a highly skilled chef of not only Chinese cuisine but also of Italian cooking and a martial artist of extraordinary knowledge and skill.

Master Look was an old school teacher who believed in the value of martial virtue (Wude). He was not my teacher but he was my close friend and confidant. I taught workshops on Baguazhang in his school in Sacramento.

He often asked me to assist him with teaching his Xingyiquan or Yiquan workshops at a number of tournaments around the country. We roomed together many times back in our workshop and tournament judging days. After completing his certification in our Li family Xingyiquan, Master Look also took my long time student Alan Marshall under his wing teaching him many advanced variations of his Xingyiquan tactics.

Henry and I shared a deep love of traditional Chinese Gong Fu, good food and drink. He also helped me edit my two Baguazhang books and visited my home socially many times in the past. I have a great many stories about our martial art adventures and misadventures, but those will have to be told a bit later for at the moment my heart is breaking for my lost friend and his many hundreds of students around the world and for his adopted golfing son, former editor of Inside Kung Fu Magazine, Dave Cater.

Here at The Gompa we are observing the traditional 49 days of mourning for Master Henry Look with a vigil candle and incense kept lit during this time of transition. Each seven days we observe the transition rituals by burning incense and chanting mantra for him and his family.