“Just do your daily practice of the mental and physical exercises each morning and evening and you will not fail to reach the stars.” 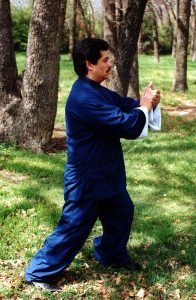 Today few people understand that Taijiquan is one of the most effective martial arts ever created. Even some Chinese have told me, This Taiji is an art of health for old people. Today with our stressed out and violent society I feel it is time to preserve the health benefits but to also resurrect the martial side of Taijiquan.

Taijiquan should be practiced to not only keep us healthy but safe from harm when we have no other options but to defend ourselves. After all Taijiquan (Tai Chi Chuan) means Grand Ultimate Boxing!

Taijiquan came to the Li clan by way of Li, Chang-Lai (1850 – 1945) He developed a family method called Willow Taijiquan (Liu Taijiquan) style from Daoqiquan basic skills and combining the Yang and Chen Taijiquan methods. He was famous for his ability to use the four treasures (Ward-off, Roll-back, Press, and Push) as his only combat methods.

My own teacher, Dr. Painter says that when he was eighteen his teacher Li, Long Dao could seemingly without effort project him many feet across the backyard even though he was physically much stronger and outweighed his teacher by a hundred pounds. Li, Long Dao said this prowess was no great secret, just long focused practice.

The Action of Ji 擠 or Press 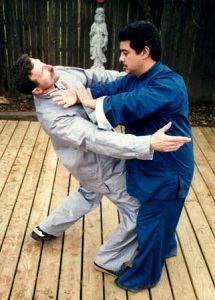 Press, also known as squeeze or Ji, is the action of shifting from a back-weighted position (dragon stance) to a front-weighted one (tiger stance) while pressing your curved front forearm forward supported by the palm of your other hand.

The lead or forward arm is in “hold ball or ward off” position and the rear arm is in “push” and is pressing against the inside of the arm with the palm. In Li Family Wubao, style this is a dual action that makes contact first with the front arm as one moves from Dragon Stance into mid-Tiger Stance and then imparts full body energy by moving into the full Tiger Stance, adding the press of the rear palm.

This movement is very strong and can be used to strike or prevent an attacker from bear hugging or tackling you. When pushing with Press the arms form a very powerful triangle.

When striking, the lead forearm strikes first then the rear palm adds a pulsing force through the arm into the body similar to the way one pool ball strikes another to impact a third.