↓
He attacks but I arrive before him.
-Chinese Martial Proverb

A principle can be defined as a point or points of probability on a certain subject, which allows for the formation of rules or laws. We have basic principles by which we live our lives. These principles govern our acts and actions. In martial arts, certain principles are used as the underpinning or foundation of the art’s ability to function in specific ways. Principles may be tactical as in methodologies of strategy, i.e. laws governing ways of dealing with various situations, or they may be physical rules of posture and movement that produce a desired level of speed or power.

All martial arts have basic principles that govern their actions; however, not all martial arts are principle based. Principle-based martial arts are those that primarily focus on establishing a set of laws governing the use of mind and body to create reflexive responses to combative situations. Principle based arts make use of simple basic exercises to train an understanding of body alignments for producing core skills needed for self- defense including speed, power and strategies. The goal of this type of training is to enhance reflexive responses to attacks.

Chinese and other Asian martial arts often train students by instructing forms. Forms were created as a learning tool and as a way of preserving principles of a specific style or art. Martial forms are comprised of a series of simple or complex martial actions arranged in a specific sequence. In short, martial forms are structured pantomimes of combat against one or multiple opponents. Forms training developed as a method of preserving and teaching martial skills to illiterate students. If you cannot read or study a martial arts manual, you have to learn from a teacher directly. In China, this meant learning long complex routines that we call forms. 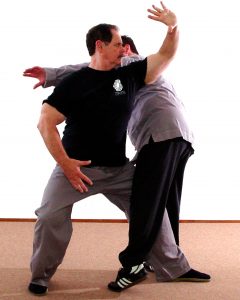 Complex martial forms are not really necessary for learning self-defense or combat skills. If they were, they would be utilized by professional law enforcement agencies like the FBI, SWAT, CIA, Navy Seals, Delta Force, and other elite combat units who have to use their skills in the real world of violent combat. Professional boxers and full contact fighters train techniques for developing speed, accuracy, and power. They study the body’s weak points and combat strategy. They do not train using choreographed forms to develop this skill. This is where principle based martial arts that do not rely on complex forms routines for training self- defense skills have an advantage as far as combat effectiveness over traditional form-based systems.

For any martial art, internal or external, to be practical, it must develop mental and physical skills for responding to violence with reflexive actions. My contention from years of training law-enforcement officers and bodyguards is that choreographed complex forms training actually inhibit a person’s ability to react spontaneously and appropriately to a violent encounter. To understand why we should examine some simple concepts of how conditioning can help or hinder our progress in the pursuit of self- defense skills for real combat.

Conditioned Response Training
Ivan Pavlov, the Russian psychologist, popularized his theory that animals and man can be conditioned to respond to external stimuli. His work begun in the 1890s, established the basic laws for conditional reflexes i.e., reflex responses. These experiments were carried out on dogs that were taught to salivate and feel hungry when they were exposed to a sound or external stimuli while feeding.

The phrase “Pavlov’s dog” has become a figure of speech used to describe someone who merely reacts to a situation rather than using critical thinking. Reacting instead of thinking is the crux of the matter in self-defense training. If you have time to think, you have time to get away and not engage the enemy. If you are engaged then it is too late to think, because your reactions will be slowed by the cognitive processes.

The simplest form of conditioning is reminiscent of Aristotle’s law of contiguity, which states, “When two things commonly occur together, the appearance of one will bring the other to mind.” Any human reflex such as a block or punch can be conditioned to occur as a response to a stimulus such as a fist heading towards your nose. What we should be concerned with here is the way in which we condition ourselves when attempting to learn a martial art. The important point here is that a natural or learned reflexive response occurs very quickly before conscious thinking has made us aware of the stimulus triggering the action. In a reflexive response before a message is sent to the brain, the spinal cord senses the sensory stimulus and sends a signal (action potential) to an effector organ (muscle) to create an immediate action to counter the stimulus.

For example, a person stepping on a thumbtack would start the reflex action through the creation of a stimulus (pain) within specialized sense receptors located in the skin of the foot. A signal would be transmitted through sensory neurons and processed at the lower end of the spinal cord, a part of the central nervous system. This signal is processed by an interneuron to create an immediate response by initiating a motor response, which is acted upon by muscles of the leg, by retracting the foot away from the thumbtack. This activity would occur just prior to or at the same instant as the brain senses the pain. In the same way, it is possible with principle-based martial training to train the nervous system to detect an incoming attack and respond before we realize the threat consciously. This is the very essence of what the Chinese called spontaneous action without pre-thinking (Wuwei無 為).

The Engram Principle
Applying science to the development of this Wuwei method we must teach the body a new motor skill and repeat the action numerous times. With repetition, the sensory and sensory-associated areas of the nervous system enable an individual to experience these motor movements and record memories of patterns of movements. Once these memories are repeated over and over they become patterns of skilled motor function. A pattern of skilled motor function is called an engram.

Engrams allow the body to replicate the same pattern of activity again and again, entirely without sensor feedback control. The cerebral cortex of our brain monitors the action, ready to impose modification as the need arises, but is unconcerned with directing individual movement unless a correction is required, relieved of integration details, it is free to concern itself with strategy.

In my experience, a conditioned response will be much faster and accurate than if you had not trained a particular response. In short, a defensive or offensive action triggered by your opponent’s attack becomes a reflexive response no longer involving conscious thought. Long complex forms training presents hundreds of methods for dealing with attacks. Research has shown that individuals remember and are able to use only about 10% of the methods learned. Therefore short non-complex methods with few tactics are best for self-defense applications. What is even better is to make use of only a few principles of neutralization for attacks and a few methods of striking. Xingyiquan with its five basic moves is ideal for this type of training. When taught correctly with martial emphasis a few methods can be designed to deal with an attack from almost any conceivable angle. It is better to know a few things well than a lot of things poorly, in my opinion.

Of course, as we begin to learn a new technique, we must understand correct body alignment and a host of other principles to allow us to deliver the method as accurately and swiftly as possible and with great power. With principle-based methods five as in Xingyiquan or eight as in Baguazhang or thirteen as in Taijiquan tactics can be learned first to give the basic ideas and then hundreds of offshoot techniques can be explored from each of the individual principles.

Simple Engrams are Best
We can create simple or complex engrams. A simple engram is a single response to a single action while a complex engram is a series of actions in response to a single action. Creating an engram of numerous actions linked in sequence (forms) is fine for an aerobic or relaxation exercise. However, having the mind locked onto a pattern that says one move is always followed by another move in the same sequence will usually produce a hesitation response in a martial artist trying to protect himself in a real altercation.

Say, for example, you are trained in forms to do a block followed by a back fist ending with a side kick. This will be the pattern your brain attempts to respond with when you are attacked. This is fine if the other guy knows to put himself in your sequence, but it is deadly especially when the opponent does not respond according to plan. In the street, this hesitation when your ingrained combination is inappropriate to the situation can be fatal.

After interviewing hundreds of law enforcement officers and street fighters involved in life and death encounters, it became very clear that simple methods win over complex tactics every time. In my own personal experience, I found that I usually resorted to a few simple tactics that I used over and over again. Those that attempted complex movements, high kicks or fanciful locking maneuvers in street fights often found themselves the victim rather than the victor. That is why I believe it is best if you have to have a form to make it a short two or three move tactic, which can be linked and unlinked with other similar tactics. This is why we avoid long memorized forms in our training, preferring more free and spontaneous training with our imaginary opponent.

This was the way my Shifu Li, Long-dao taught his martial arts. In his Baguazhang, for example, we would learn correct posture and body mechanics first and then we would learn a short sequence of no more than three to five movements. Each move was a short technique containing a neutralization action with an almost simultaneous strike; each had its own specific method of using a stance and stepping pattern. We trained each one separately for a long time at first holding each posture like a standing meditation and then moving from a neutral stance to the posture until we were familiar with the basic principles that made up the tactic.

Next, we created a short martial form (Tao-lu套路) where the moves were linked in a sequence. We worked on this for a time and then we did something most other teachers never do; we were told to change the sequence to reverse it so that we linked each individual tactic with one not previously used. After this, we were told to take each form and create new sequences using the neutralization actions and stepping pattern of one tactic with the strikes of another.

In this way, we never created long sequenced engrams but became familiar with many practical ways of using just five basic principles of movement to create almost unlimited patterns of defense and offense. The same process along with application drills was repeated when learning his Taijiquan and Xingyiquan styles.