Another myth that arose about Chinese martial arts was that they originally contained both hard (Yang) training and soft (Yin) training along with a sprinkling of philosophical study. When we move back to the early era where martial arts were taught to soldiers and bodyguards there appear to be no divisions of hard and soft Yin and Yang or philosophical training.

There is no evidence that early martial arts taught circulation of life force energy (Qi) in order to gain some mysterious strength of martial prowess as proposed by some modern books and videos. Early Chinese martial arts were combat methods that demanded hard physical discipline, stamina, endurance and strength of mind and body. Meditation was not at first part of the soldier or bodyguard’s curricula for training combat skills. The myth of the all wise all knowing master grew out of the hugely popular fictional writings of the day called the Knight Errant or Yuxia stories.

Along the way someone did however discovered that by sitting down and resting the mind and body perhaps looking at a peaceful mountain scene, waterfall or billowy clouds that some of the stress disappeared at least for a short time. It was noticed that the more regularly one did this “Quiet Sitting” emulating at least in appearance meditations of Buddhist and Daoist adepts that one seemed more and more capable of dealing with stress in a less nerve-racking way, certainly a good skill for a martial artist to develop. So in time to sit quietly (Jingzuo靜坐) became part of some martial art training. 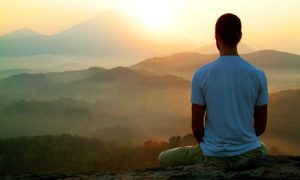 Bear in mind that this was not strictly meditation (Zouchan 坐禪) of Buddhist or Daoist origins it was a much simpler concept of just sitting and observing something in nature. In its earliest phase Quiet Sitting is similar to beginning exercises in Tibetan Bon and Dzogchen masters’ way of dispelling illusions. They call it Sky gazing (Namkha arte). It is said that this was one of the reasons the French revised the concept of the Gazebo a structure originally taken from Chinese observation posts that afforded a lovely view. The French and later the English said that sitting quietly in the Gazebo could be a way to stave off the feelings of melancholia and bring on a more pleasant mood through gazing at nature.

In the Li family system known as Daoqiquan (way to energy through boxing) Jingzuo begins with observation of the environment and our own nature. It  has evolved into a powerful method of allowing the mind to find silence and then for developing skills to begin communicating directly with the unconscious control mechanisms that influence thoughts, attitudes, blood flow, internal organs and physical strength.

From this silence a place where there are no distractions we can learn to use our minds intention (Yi) to direct the heart / imagination (Xin) to cause our bodies to react and follow our desired goals. After one has internalized Quiet Sitting so sense memories of calm abiding can be brought instantly to mind the student may have the opportunity to experience a type of Zen art pugilistic skill (Chan Fa Quan Gong where things happen naturally even during stressful situations or combat.

What this means is simply that when the mind can be quiet and still even in conflict and is not distracted by anxiety, overconfidence, or pre-planning one can react spontaneously (Wuwei) to a situation in a truly uninhibited and natural fashion. This is the hallmark of a true master’s ability. While not originally a part of the early martial arts training these concepts have been integrated into some schools of martial training like Li family Daoqiquan in a way that makes them practical and of great benefit to all who want martial skills, health or both from their practice.