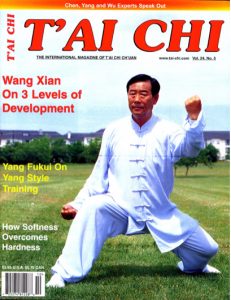 Marvin Smalheiser (85?) founder, publisher and editor of T’ai Chi Magazine died recently in California of undisclosed causes. Marvin founded Wayfarer Publications in 1981 for the purpose of promoting the internal martial arts and Qigong with a main focus on Taijiquan (Tai Chi). His was one of the first magazines to exclusively focus on just the Chinese internal arts and featured many well known and lesser known instructors as authors of informative articles.

Marvin and I were not close friends in the beginning; he deeply resented me starting my IAM magazine in 1986 as he saw IAM as competition for his publication. It took the efforts of the late Master Jou, Tsung-Hwa to bring the two of us together at a sit down dinner in Warwick NY in 1990.

Master, Jou ever the peace maker explained to Marvin that we both had a similar goal, the promotion of internal arts to a Western audience. Once Mr. Smalheiser understood that IAM focused on all Asian internal disciplines and philosophies from Japan, China, India and Tibet he relaxed his prejudice and from that point on he accepted my contributions and publication without rebuke. As a side note in the final years of Tai Chi Magazine Marvin did add contributions from teachers of Baguazhang and Xingyiquan as well as Qigong which in my view simply helped more people learn about these lesser known styles.

Although I must say that when it came to Taijiquan and Qigong he and I did not see eye to eye on many things and I often questioned some of the validity of mystical claims made by some authors in his magazine. Nevertheless I will always honor Marvin Smalheiser as a pioneer in opening the door to the world of Chinese internal martial arts to a large audience in the western world.

What is very sad is that sources close to Wayfarer publications tell me that Marvin ordered all of his articles, past and future plus his hard drives with unpublished interviews of famous and not so famous masters to be destroyed upon his death. If this is true it is a very sad day for the Internal Arts. I would encourage any of you who are interested in the wealth of information contained in these publications to purchase back issues from anyone who is selling them on the internet as the demise of Marvin Smalheiser and Tai Chi Magazine marks a sad day for readers and fans of the internal arts.