“When the student is ready the teacher appears”

I went off for the weekend. Scattered. Rushed. Unsure. Some Tai Chi teacher I am huh? I had just finished my grueling day of classes (nearly 10 hours) and hopped in the car with my friend Vin for the ride up to the Berkshires. I still hoped to make it to the end of the afternoon session of a weekend Tai Chi retreat.

In fact, it would be half a weekend if I could make it…best I could manage. The hosts were Rick Barrett (amazing, kinetic and giddy) and Don Ethan Miller (soulful, loving, and true) and I was to meet some close friends there as well. In short, lots to look forwards to if only I could only get there.

We arrived at the tail end of the afternoon’s workout and Don graciously imparted some amazingness to me in a few short minutes. Thanks to Don Miller My Peng掤 (ward off or rebounding skill) and An按 (press skill) improved in ten minutes to a degree unachievable over the last decade or so. My spirits were settling, or perhaps rising already. After a break for dinner we headed for an evening workout. Push hands with these talents brought me past midnight before I knew what had happened. Talk about playing Tai Chi! Wondrous.

After some late, late night (or early evening) meditation to attempt a reasonable digestion of the teachings, I practiced my form a lot. I showered and went to greet the day. I started with pre-dawn meditation and an intense fight with my body over how best to do my form. Soon I was feeling like a Tai Chi teacher again perhaps with reason too.

The day’s lessons began with Rick Barrett reviewing his suggestions from the day before (perfect for those of us who had missed all of Saturday; and by ‘us’ I mean me.)  Soon enough I felt I had actually neared an understanding of Rick’s tensegrity explanation of the impenetrable Tai Chi Classics.

Now it was Don’s turn to take the stage (and by stage I mean lawn) and lead us through some of Yang Lu Ch’uan’s études. The practice was like doing scales. “When can I go on to the next thing!?!” We repeated Old Man Plays Guitar over and over with Don conducting. Of course, in a very short time Don had this tone-deaf man playing in an orchestra with all the other folks who’d come out to play. Play! I see now!

It was about now that I began to wish I were religious so I’d have someone to thank for my two teachers. Before my mind could wander too long through the potential pantheon, Don was suggesting a Shamanistic approach to our training. Shamanism. Taoism. How had I failed to make this connection before? And it was here I found my Third Teacher of the day.

Tai Chi as I understand it is man’s attempt to understand nature. Of course, as with any true understanding comes harmonization. The orchestral conductor was about to have us harmonize but not as a group. Our lesson was to take a movement from our form and repeat it on both sides (as per Mr. Yang’s example of years before) again. However, this time we would break from the troupe and go find Nature. A rock. A flower. A pond. What-have-you. We were to do the exercise ‘til a bell rang forty-five minutes from our start. Then we’d come back to form a circle and discuss our experience. Easy. Well, easy is FAR from the right word, simple perhaps, but not easy. 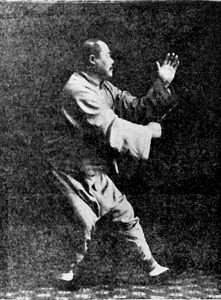 I had chosen to do Fist under Elbow from my form while maintaining a horse stance. Easy for a Kung Fu teacher. I am sure other folks were struggling to mirror single whip or stand on one leg for 45 minutes. Fools. I set my feet in the soft earth and intuited when the tree might be ready to begin. Punch. Punch. My punches drifted past the tree at slight angles and my view was of the trunk only inches away from my face. Punch. Punch.

The very first thing I noticed was a change in my Yi意 (intention). I had always learned and taught to have your mind in the target or through the target. Hence, the concentration was always in the knuckles or ahead of the fist. No longer true. For the first time I was punching emptiness. I had of course punched nothing each time I would practice my solo form, but emptiness had no sensation for me then. Now, with the tree before me so very nearly being struck, I was finally aware of nothing. And nothing, for those unaware is really something.

Second, I noticed the wood itself. Part of my original plan had been to practice this movement with some wood because my Hsing I studies had shown me that this type of motion correlated with wood. I had often thought of wood and the properties of the wood phase according to the Five Elements theory since taking up Hsing I over 5 years before. In fact, I had begun studies of Hsing I (along with Ba Gua and Aikido) solely so that I might better understand my Tai Chi.

Finally, now I was able to see wood as a living thing. I had ‘til this moment thought of wood: lumber, beams, sticks, twigs, & shingles. Never once had it occurred to me to think of wood as living. Growing. As life. Now the punch was neither pushed from the foot or hips nor was its motion elicited from a target’s openings. It was a growing feeling. And growth in living wood is in the taproot, not the branches (arms) or trunk (waist.) The bubbling well and what lies below it were spurting up and from the Earth. Growing to new dimensions.

Thirdly, I was made aware of more than my fists. I had on occasion used a tree to practice this posture, striking the trunk of the tree with my fists. This time however, the tree emerged as a partner in my practice and was no longer a target. The delicate flaking of the alabaster bark was enough to create a massage of my forearms. I punched with such precision that no flake of the sensitive skin of the tree ever fell or broke off. Each shaving seemed to suggest that my forearms needed massaging. Or that the tree would enjoy a massage. After a time, I could no longer sense who was massaging who. The gentleness of my punches became the foremost component in my practice. No longer was I destroying something, rather I was healing with a punch. Or being healed. Or both.

The Earth. Soft. Surrounding. Receptive. Cool. Warm. Firm. Had I never noticed these things before? Me of the Always-Barefoot School? As I stood punching – me and the tree in revelry- the Earth asserted herself as a fourth teacher. In years past, I had shifted my weight to bring the ground into compliance with how I knew the form to be. It was only a matter of how hard to press, to set my weight within the soles of my feet. Now though, the dirt pressed in and rose up to my arch, my ball, my heel. Where discomfort arose a shifting occurred within me with no instructions from my brain. The ground was finding a place for us to work together and I (for once!) was giving no argument.

By this time, I was coming to understand that the violence within the move is not inherent. I don’t mean just any movement. I mean this flagrant I’ll-kill-you-with-my-bare-hands movement. I had believed that this was not only violent but that it was hyper-violent; after all, we do strike to CV14 (a death point in Dim Mak) with this move don’t we? How can it be violent with no target? How can a massage lead to violence? How can you perceive a tree’s growth as violent? The violence in Tai Chi Chuan is not inherent. It is certainly integrally possible but most certainly not inherent.

Next, I noticed bugs. Ants had begun to explore my fingers, arms, and feet. The Earth welled up over my toes and birds landed nearby. Certainly no ants would dare crawl on a person who was battering a piece of their home. The shock of my strike would certainly cast the ant into a long fall. I had been accepted as a natural part of the space. Without malice. Perhaps the soothing energy arising from the space the Tree, the Earth, and I were creating drew these creatures close. I sensed that they knew it was ok. And it was.

Rooting, I must mention it, oh about 287 times per class. Now I know whereof I speak. It turns out that below my Earth teacher there was, like hidden tastes below a chocolate skin my teacher the Birch again. Subtle surely, but waiting for me to come to my senses. All of them. When the student is ready the teacher will appear. Or reappear as in this case. I felt my root intertwine with the living roots of this tree. As though to take my hand and lead me down the path.

If Taoism is a path and Taoism is nature, perhaps I had found where my mind had first created a false divergence of the word. This was Tao. Now, I felt my arms swaying. Drifting in the slight breeze. Dancing to the rhythm of the universe. Balancing a row of ants. Offering solace to passing birds. Receiving solace. Enjoying the world. Immersed. Of course, my arms and body continued in the proper motion as I had begun. But I could no longer be sure if I only thought that they punched, or if in fact I had metamorphosed. Where is the tree? Where is me? I had thought that as I neared perfection in my Tai Chi I would have clarity. Could it be that Tai Chi was useful only insofar as it could blur what I thought I knew? I weigh the two outcomes in my mind…I will accept blurring.

Fearful now that I might lose these lessons, I break the meditation and run, crying to my notebook. Sobbing truth be told. Overcome. I hastily unplug my brain and let it drain onto the paper. Never before had I failed to finish a teacher’s assignment. After all, he had said 45 minutes and I lasted a mere twenty-five. Any teacher as interested in developing good students as I cannot go to a class and return as anything less than a model student,. What would my own students say?  I could not go on. 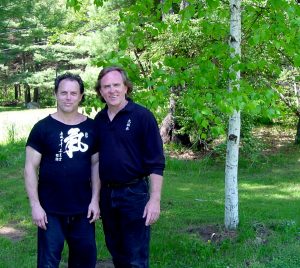 I am counting now these lessons. 8 in all. Strange that number surfaces with each Tai Chi lesson. Each of these lessons was something I thought I’d learned or expected to learn in a number of years.  Average breakthrough rate for me historically: 2 years. Two years of patience and diligence and cursing perhaps and then, Eureka!  So. 8 lessons.  2 years each. Sixteen years of learning from 25 minutes practice.

I bet anyone can find 25 minutes and Nature now. I’m off to practice Tai Tree. Then Tai Stone. Then Tai Sea. This time I’m in no hurry.