↓
A student asked Tao, Tzu
“How about when I don’t bring a single thing?”
Tao, Tzu said, “Where did you get this?” 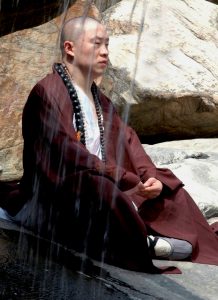 An Indian prince, Siddhartha Gautama over 2,500 years ago searched and eventually found a path to mental freedom. He became known as Shakyamuni Buddha (the awakened one). The first Buddha discovered this truth while sitting very still and allowing his mind to experience a state in which thoughts, attitudes, and distinctions dissolved into a blissful void like state. What he discovered in his inward journey is that we are not our thoughts or our beliefs. His discovery can be possibly classified as a noumenon or spiritual state.

In Kantian philosophy, a noumenon is something that exists independently of intellectual or sensory perception. It is a purely mental awareness that is beyond the tangible world known or identified by the mind. It is not experienced by the physical senses yet its presence can bring a feeling of transcendence to mind and body.

This non-state that can be discovered in meditation is devoid of religion, dogma or rules. It is the true state of meditation that is the goal of original Buddhism. It is a state that is discovered within without the use of ordinary sense-perception. Discovery of this noumenal world through true meditation limits intellectual reasoning to its proper bounds, making many questions of traditional spirituality, metaphysics, religion, and free will unanswerable by reason or logic alone.

True meditation in the original tradition of Shakyamuni Buddha’s discovery or Zen is a spiritual but not a religious experience. No gods, goddesses or magical beings were a part of the original methods, just you and the world of nature. Many falsely assume that one uses meditation to withdraw from the affairs of ordinary life into a detached realm devoid of emotions or feelings. Nor is the real purpose of meditation to calm the mind or to cease caring about matters of one’s life. Nothing could be further from the truth.

The true purpose of meditation in Buddhism is to experience a profound and liberating insight into the nature of yourself and reality. Meditation functions by developing a powerful focused attention to the way your mind works, how it thinks, feels and creates illusions which you hold as your belief systems. It shows you that these ideas are false impressions and that there is a greater reality than you have realized. In the end, the goal of Buddhist noumenal meditation is to find out you really are and what the world actually is without your self-imposed filters and thereby bring your restless seeking and dissatisfaction with things to an end.