“History is a pale shadow beneath the moon of truth” 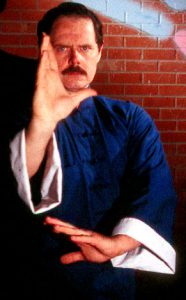 Please remember I do not claim to be a Chinese martial historical scholar, what follows is based my own research and stories told to me by my Shifu as a child. It is not my intention to set myself up as an authority on the subject. Please feel free to take from my comments what is meaningful and discard the rest.Martial arts are indeed a huge part of Chinese culture.

The history of warring arts (Wushu) stretches back thousands of years. As to the accuracy of historical accounts it would be well to remember that China is a huge country with over 1.9 billion people covering some 10,460,000 square kilometers of territory. Accurate records of martial arts development in ancient and even more recent times were seldom kept and those that were rarely became part of library collections.

A great many of Chinese martial arts founding masters were illiterate and passed down their histories in stories told to their students, others were persecuted or branded as criminals by local or government officials. Many teachers as was a peculiar Chinese custom changed their names more than once, making it difficult to track their activities.

Also numerous records have been destroyed during various book burnings that occurred in China. What most so called martial historians have done is to draw their own conclusions relying on traditional stories passed down by word of mouth, a wide and colorful collection of anecdotes, myths and stories from fictional literature liberally sprinkled with a number of imprecise extant written records.

To any one who takes the time to read serious academic version of Chinese history, found mostly outside martial arts books it becomes clear that accounts told in popular literature, magazines, books and videos about Chinese martial arts origins is a confusing mix of fantasy, fact and outright untruths.

For example the myth of the Shaolin temple being the source of Chinese Martial arts. In the 1920’s a Chinese historian named Tang Hao ignoring the ridicule of his colleagues who did not take martial arts seriously, began deep research into the stories of the Shaolin Temple and the Daoist (Taoist) martial arts from Wudang (Wu Tang) as in Wudang Shan the legendary temple of Daoist martial arts.

The result was a scathing tell all book titled Study of Shaolin and Wudang. Tang Hao proved through factual accounts that Bodhidharma (Damo) the Indian monk who taught meditation at Shaolin knew nothing at all about martial arts and could not be the founder of Shaolin Quan. He also exposed the myth of Wudang Shan as connected to the legendary founder of Taijiquan (Tai Chi Chuan) Zhan San Feng proving that although a shadowy figure named Zhan San Feng may have existed he had nothing to do with Chinese martial arts or Taijiquan.

Much of Tang Hao’s work was ignored in favor of the myths and fantastical stories that prevail to this day about the origins and skills of the Chinese martial arts. And today in modern times these myths are still perpetrated by films, books, pulp magazines, the internet and most especially the Chinese government who see big dollar signs in luring gullible Westerners and Europeans and even some Chinese to come learn “authentic Chinese Martial Arts” by operating schools at the supposed locations of the Shaolin Temple and Daoist Wudang Shan.

The truth is that Martial arts existed in China long before the myth of Shaolin and Bodhidharma or Zhan San Feng arrived on the scene. Early records indicate its history can be seen to extend back to the Zhou dynasty (1122-249 B.C.) and possibly even earlier. What is also clear is that originally the Chinese martial arts were in no way connected to spiritual, health or philosophical concepts; they were for fighting plain and simple.

Over time arts such as Taijiquan and Baguazhang have evolved to take on many of these other so called spiritual and medical concepts. Often miraculous cures that really have nothing to do with the original arts are attributed to things like Taijiquan, but that is another story.

So is History Important?
That all depends on your personal goals in learning a martial art. The facts are that in terms of exact history or even the lineage of a specific style you and I cannot know the real truth! We cannot know the truth unless we were present at the time and observed the event taking place. Even if we had a video camera and time machine to record such events we may interpret what we saw through the eyes of our experience which colors our retelling of it to others.

Some history as I have indicated is even fabricated to suit a particular goal or to enhance one group’s dominance over another, the farther back in time one goes the more likely that fact and fantasy are intertwined. This is very clear in what is presented as Chinese martial arts histories today in the popular press.

So is history important for learning a martial art? I think it is good to know something about the roots of an art but it is not really necessary if your focus is on practical combative methods or even the modern health aspects. Historical knowledge gives people a sense of being part of something larger than they are. For those who want to learn martial arts as a hobby or recreation knowing some history allows them to feel more connected to the warriors of the past whom they may fantasize themselves becoming.

I love to read the mythological stories about Wyatt Earp, James Butler Hickock, Jim Bowie and the tales of Chinese knight errant’s (wuxia) they inspire me to be a better pistol shot, to “ride straight and speak the truth” or to be a more focused person or a better knife fighter or swordsman. All of these things are inspiring but none of them really improves my physical skills. Only serious focused training can do that.

For those who want practical skills a search of history and lineage need go no farther back than the track record of the instructor who will train you. All that needs to be known is does the person teaching you have experience, skill and ability to help you learn what you need to know. A Seal team member or SWAT team leader does not question how old or historical a tactic is or who invented it. A team leader or commander may investigate to see if others have successfully used a method and if they found it useful, but he does not need to know the family tree of all the teachers back to the originator of the style.

When in pursuit of martial skills or health skills one need only ask has it worked for my present teacher and his best students? If the teacher purports all manner of claims to lineage and history stretching back to the distant past but himself is unhealthy or incapable of being an example to look up to I suggest you head for the nearest exit as fast as possible and look for someone who is the epitome of your goals as a good Shifu (teacher) to follow.

Thank You For Your Attention.
John P. Painter, Summer 2015

I highly recommend anyone interested in this subject to read the book.
Chinese Martial Arts Training Manuals / A Historical Survey
By: Brian Kennedy and Elizabeth Guo
From: Blue Snake Books