I am the Walrus – The Beatles

Is there real science behind the idea that we can have a transcendental spiritual experience from the practice of meditation and or other Asian internal exercises? I believe the answer is yes. There is a biological explanation as well as hard scientific evidence surfacing in the study of physics known as Quantum Mechanics.

Much of the work in this field of research was in fact inspired by physicists after studying ancient philosophical and metaphysical texts from various cultures. The founding fathers of Quantum Mechanics saw evidence of the strange nature of the universe in the Jewish Qabbalah, Chinese Daoist Daodejing, Huayan Buddhism, Hindu Upanishads and even the Platonic theories of ancient Greece where they discovered similar ideas to their scientific calculations relating to the nature of the universe especially in the sub-atomic realm. This is a realm where matter, energy, space and time no longer act in accord with Newtonian separatist laws.

One of the concepts discovered was the same that the ancient philosophies Buddhist and Daoist masters have espoused for centuries, that everything is interconnected. This non-dualistic view of the universe today is also shared by science in Quantum Physics. Known in Eastern philosophy as Indra’s net or the net of jewels, Indra’s net is a Hindu legend about an enormous spiderweb-like net of jewels created by the Vedic god Indra.

Indra’s net has a multifaceted jewel at each vertex, and each jewel is reflected in all of the other jewels. In the Avatamsaka Sutra, the image of “Indra’s Net” is used to describe the interconnectedness and interdependence of all things in the universe. In the legend, nothing is outside of the net of jewels. All is contained within each jewel and each jewel is like a hologram of all the others. Each jewel is in communication with all the others no matter how close or far away they are.

The Huayan 華嚴or Flower Garland school of Buddhism; (from Sanskrit: Avataṃsaka) is a tradition of Mahayana Buddhist philosophy that flourished in China during the Tang dynasty. It is based on the Avatamsaka Sutra (Chinese: Huáyán jīng華嚴經). The name Flower Garland is meant to suggest the crowning glory of profound understanding. The Huayan School is known as Hwaeom in Korea and Kegon in Japan. The most important philosophical contributions of the Huayan School were in the area of its metaphysics. It taught the doctrine of the mutual containment and interpenetration of all phenomena, as expressed in Indra’s net. One thing contains all other existing things, and all existing things contain that one thing.

British Zen master and philosopher Alan Watts said, “Imagine a multidimensional spider’s web in the early morning covered with dewdrops. And every dewdrop contains the reflection of all the other dew drops. And, in each reflected dewdrop, the reflections of all the other dew drops in that reflection. And so on and so on ad infinitum. That is the Buddhist conception of the universe in an image.” The metaphor of Indra’s net was developed by the Mahayana school in the third-century Avatamsaka Sutra and later by the Chinese Huayan School between the 6th and 8th centuries. Indra’s net is reflected in Quantum theory where it is shown that what we call reality is not only infinite but also that all experience is infinite. We do not see this interconnection because our limited human ability to sense this realm creates the experience of the illusion of time and the solidity to matter. In truth all things including ourselves are enmeshed and intertwined in a non-dualistic existence of vibrating energy net.

Quantum theory shows us that all these things truly are only one thing, which humans have categorized as opposites because of our limited mind. We have taught ourselves through Newtonian physical laws to see only one aspect of the whole. 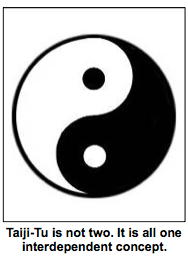 Those who engage in deep meditation practice upon these illusory opposites believe they can come to experience this totality within them. An example of non-dualism is the Daoist concept if the Taiji-Tu or Yin Yang symbol. This symbol depicts two halves of a circle flowing into one another endlessly not separate and independent but interdependent one being a part of the other with no ending or beginning. Those who have learned to embrace this concept of non-duality and see both the darkness and light within as one can clearly see nature’s lessons.

Through meditation, Yoga, Taijiquan, or Baguazhang practices performed with deep mindfulness, we may come to see things objectively and not make dualistic judgments. As we calm our desires and rid ourselves of the separatist mental divisions of the world, our mind can become like a clear pool reflecting reality which is the first step to see things as they truly are.

This jeweled field, thought to be as if a canvas upon which reality is painted in Quantum theory, is called the Zero Point Field or background in which all information is contained and exchanged with all other forms of energy. Philosopher William James in the early 1900s called this concept Cosmic Consciousness.

Some individuals believe that through accessing internal quietude in meditation and or other internal arts practices our minds may tap into this background or Zero Point Field and find that we are all one continuum interconnected with everything else. Certainly such experiences would definitely be of a spiritual feeling in nature. If these theories are indeed true perhaps with patience and time we can discover and perhaps experience a much deeper Qingtai / spiritual mood brought about by a sudden awakening of the mind. This awakening is after all the goal of all Buddhist and Daoist seekers. Such awakening is said to be one that shows the path to living life in the wonder of the eternal interconnected field called the now.