“The mind (Yi) commands, the body moves and the Qi follows.”
-Wei Boyang

Daoist master Wei, Boyang author of an ancient book known as the “Can Tong Qi”, often translated as the “Secret of Everlasting Life”, a Daoist manual for developing internal power written around AD 142, sums up the original practice of what has come to be called Qigong in his first chapter with the following statement.

” In the end whatever you call it; it is no more than Yi and Xin (the mind) and the Qi (breath) becoming as one. It is simply the Yin and the Yang influenced internally with their energy entwined.”

His book is one of internal alchemical transformation brought about through meditation. There is no mention of special physical forms or gymnastic movements that often pass for Qigong in modern times. Master Wei tells us internal energy develops in the mind, is transmitted to the body where it manifests itself as health and vitality.

This process is the very core of all healing methods in ancient and modern Qigong no matter what the style or method, be it sitting, standing or moving, the mind and our desire to believe the process is what activates the healing methods. It seems like magic but it is not, it is a truly natural phenomenon that we all have and can use if we learn the methods of communicating with our unconscious mind.

Some years ago it was my misfortune to be involved in a martial arts application that resulted in a partial tear of my right biceps muscle. After the accident I was told that without surgery I would be unable to curl more than ten to fifteen pounds with my right arm. At the time, because of my profession as a body guard and martial arts instructor, insurance was a very expensive luxury. As we could not pay for an operation; I was left with a barely usable right arm. 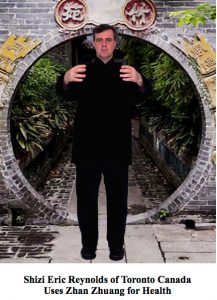 Some time before my injury I had come across the exercise research physiologist, Dr. Guang Yue, at the Cleveland Clinic Foundation in Ohio, who found that mentally visualizing exercise movements in relaxed muscle tissue was enough to increase strength in muscle fibers. Using this as a premise I began a highly disciplined regimen of our Li family Zhan Zhuang (standing meditation) imagery method to heal the injury.

Dr. Yue’s work showed that one can increase muscle strength solely by sending a signal to motor neurons from the brain into relaxed muscle tissue. I began each morning with Zhan Zhuang void standing (arms at the side, feet about six inches apart) during which I visualized the blood vessels of the arm sending fresh nutrient rich blood into the damaged biceps. I also visualized individual muscle fibers lengthening and becoming thicker and stronger.

All the while I was standing relaxed in song-jin arms hanging loosely by my side. No flexing or tension was allowed to enter the arms during the exercise. To aid the exercise I also prepared a VHS tape with subliminal messages about my arm healing and this was also accompanied by photos of muscular arms in relaxed and flexed positions. These were set to flash on the screen so quickly that they were seen just as blips of light. I would stand in front of the screen and stare into the black display as the messages popped in and out of view.

For the first two weeks there appeared to be little or no sign of improvement, but having faith in my methods I persevered. During the third week my arm would begin to feel warm and I could see a noticeable color change as the upper arm as it flushed with blood during the standing practice. As more mobility returned to the limb I continued with renewed resolve to heal my damaged biceps by this method. By the middle of the second month the atrophied biceps muscle seemed to be getting longer and a bit larger. To the amazement of my doctors the rather pronounced gap between the forearm and distal head of the biceps seemed to be decreasing. The muscle seemed to be lengthening; measurements taken by my physician of the muscles length and circumference confirmed that this was indeed the case. 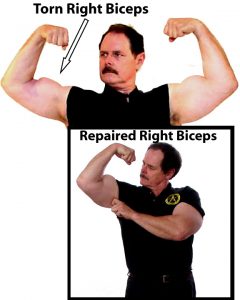 My practice continued for three months until full mobility of the arm was regained. Only then did I begin performing resistance exercises with light cables and other exercises. Within a year and without surgery strength had returned to the muscle. In fact, my my biceps was actually larger and stronger than before the injury.

The gap from the tear in the right arm never completely filled in, but it is hardly noticeable and the arm is again fully functional. I had discovered that combining intention (Yi) with visualization, self talk and exercise produces profound results at a neurological level. These findings although largely anecdotal imply that standing meditation can be a valuable adjunct to the development of physical speed, strength and power through the use of guided imagery techniques when coupled with internal type standing practice-at least in our Li family methods.

This is a video demo of whole body power pulse energy (Fa-jin) with Baguazhang. The internal force used is derived from Yixingong (Yiquan) training. https://www.youtube.com/watch?v=BM_Tvgrvhvo&feature=youtu.be